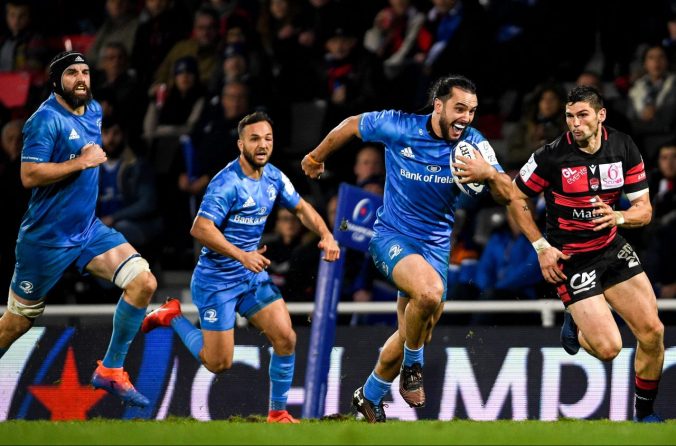 Happy New Year! What makes it a particularly happy new year for Leinster Rugby and the supporters is that they are still unbeaten in both the Pro14 and Champions Cup this season. It’s an incredible achievement and richly deserved, a credit to the backroom work from Cullen to blood so much youth in the squad and then the coaching staff getting the absolute best out of each of them week in week out. The coaching staff at Leinster is developing an incredibly strong group and having huge belief by giving them a lot of chances to shine on the big stage, with very positive results. You could see this over the three inter-provincial games over the Christmas period where we defeated each of our Irish rivals with a large number of inexperienced players. Nothing looked inexperienced however in terms of how they went about each game.

This weekend, we’re back into the Champions Cup. Leinster created history in round 4 of the competition in December by being the first team ever to secure a playoff spot after 4 games. This weekend, Leinster has the opportunity to go 5 from 5 and potentially secure a very valuable top seed spot. Of course, they will need to get a win against Lyon at the RDS. Exeter are Leinster’s closest rivals in the Champions Cup to also secure a top spot, so keep a close eye on how they get on against Bath. Toulouse too are on our heels and unless we slip up this weekend or against Treviso next week, could overtake us in the seed rankings and push us down to third. So, the goal is clear, secure a winning bonus point this weekend and get almost both hands on that coveted top seed.

Leinster last met Lyon in France in round two and managed to come out victorious by 13 points to 6. Lyon are a very strong side who have been at the top of the Top14 table for the majority of the season, 12 points clear of Racing 92, and even further ahead of other fellow French rivals Toulouse and Clermont. Although Lyon are very new to this competition, they are a team that can bring down very strong opponents as evidenced in their domestic league. In the Champions Cup, they have not done so well, only winning one of their pool games so far.  Their hopes of qualifying for the knockout stages are all but gone but I doubt Leinster will prepare for them to lie down come kick off on Sunday afternoon. Lyon are the kind of team that if you give them a whiff of complacency or weakness, they will punish you severely with the talented arsenal they have.

Ultimately, this game is Leinster’s to lose, their form has been improving week on week and the cohesion in the squad is unbelievable to watch as Cullen appears to put out a very different match 23 squad each week without any dip in performance levels. The hunger and drive in the squad, particularly the younger crop of players, is an absolute delight to watch, the likes of Kelleher, Connors, Doris, Frawley, Deegan and many more have become household names very quickly and are seriously challenging the Irish internationals within the squad for their place in blue, and in green!

Here’s Cullen’s selection for Sunday, kick off 1pm at the RDS:

Fourteen internationals are included in the starting 15, with James Lowe the only player yet to gain international honours (until October this year, watch this space). Henshaw and Ringrose make up the centre while Larmour, D Kearney and Lowe return to make up the back three. Sexton is still recovering from injury so Byrne gets the nod at out half while McGrath comes back in at scrum half. The 1-8 combination is very powerful, literally no weaknesses there. I was initially going to mention that our lineout is probably the main area where additional focus and preparation is required. However, upon researching the stats, Leinster have the highest success rate in the lineout in the Champions Cup with 93% success.
On the bench, Cronin, Porter and Kearney will be ready to add further international experience into the game if required. Dooley, Doris, Gibson Park, Moloney and Frawley will also look to continue their excellent form by making an appearance at some stage.
It’s great to see Frawley playing so well, our out half choices are all very strong, especially now that we’ve witnessed the great talent of Harry Byrne over the last month. It’ll be very tough for Cullen & Co. to hang onto all of these incredibly talented lads.

Where the game will be won
Lyon are more or less out of the competition, there’s very little hope for them at this stage, so this may impact the team selection and mindset that they travel over to Dublin with. That being said, it’s rare that any team just roll over and call it a day, and I doubt Lyon will do that, initially at least. If Leinster are to win this game, and secure a bonus point, they need to hit Lyon very hard from the off and not try to gradually work themselves into the game. Reason being, and as mentioned earlier, if Lyon are given any hope of competing in this game, they will get their tails up. Leinster will need to be switched on from minute 1 and dominate attack and soak up all tackles in defense. Getting on the scoreboard early and applying massive pressure from the off may be enough to beat the visitors down and create scoring opportunities for us. Remember, the bonus point is key, I don’t want to get ahead of myself but we all know how important the seeding is at the end of the pool stages. Leinster have already qualified for the knockouts, but should not ruthlessly chase down No.1 seed. Hunger and determination to achieve that goal will be key for Leinster, otherwise complacency could set in and cause us trouble.

Prediction
Lyon will start well and apply early pressure but I feel a big performance coming from Leinster. I expect an early score from Leinster, cheeky prediction is Luke McGrath to score the first try of the match. With the way Leinster has been performing all season, it’s very hard to not see a home victory come the final whistle. I think they’ll secure the bonus point too.