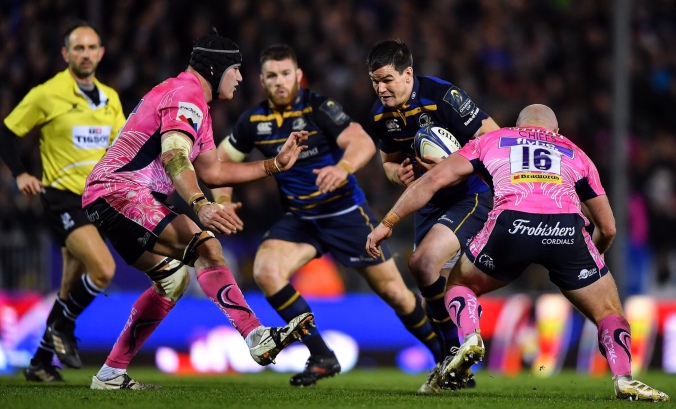 Three rounds done, half way through the pool stages and Leinster are riding high in the Champions Cup! Of course, there is still a way to go and I’m sure in the Leinster HQ, there are no chickens being counted, and a fat lady is still silent! However, away from home in a ground undefeated in 2017, Leinster defeated the Aviva Premiership Champions to make it three wins from three in the championship.

The game started strongly from both sides looking to assert their dominance early. It was Leinster that came out on top in the opening encounters and it almost looked like a try was scored before the 5 minute mark from Luke McGrath via a Sexton offload inside Exeter’s 22, but following a TMO consultation it was deemed that the out half’s foot was in touch before releasing the ball.

Minutes later, Devin Toner crossed the line for what looked like the first try of the match. However, when Roman Poite asked the TMO “try yes or no” and although it looked like Devin surely grounded the ball, video evidence was inconclusive, thus leaving Leinster tryless again.

Undeterred and filled with ambition, Leinster piled on relentless pressure and found themselves in Exeter’s 22 again and this time they left with 5 points thanks to a try from Sexton out on the wing. 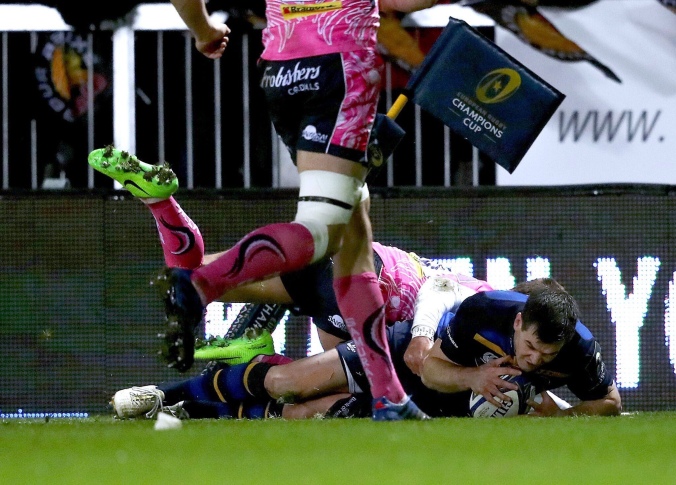 Sexton was unable to slot the conversion and minutes later Exeter got their scoreboard ticking over via the boot of Steenson to make it 3-5 as the game ticked into the final quarter of the first half. Sexton uncharacteristically missed another kick at goal but fortunately got another chance shortly after to extend the lead to 3-8.

Exeter tried with all their might to score a try before half time and despite over 30 phases and being camped on Leinster’s try line for the final 3 minutes of the first half, Leinster’s immense and rock solid defence managed to turn the ball over thanks to the hands of Sean O’Brien. The first half ended at 3-8 after a massively physical shift from both sides. The first half took a whopping 54 minutes to conclude due to several ferocious scrum battles and some injury stoppage time.

It was clear from the beginning of the second half that both teams opted to throw caution to the wind and deploy an all out attacking game plan. Initially it looked like Leinster had the upper hand in this area but Exeter’s winger James Short started thwarting Leinster’s defence and eventually weaved his way through to score a crucial try for the home side, but unconverted by their out half. After 53 minutes, the score line was all square at 8 points a piece.

At this stage of the game, Leinster still looked to be the dominant force but Exeter are a side that refused to give up and continued to threaten Leinster and test their defence for the rest of the game. However, Leinster’s attack was a lot more accurate in the second half and they slowly started to pull away on the scoreboard after a 3 pointer was scored from the boot of Nacewa. Shortly afterwards, the away side went for the jugular and on the 71st minute mark and after a gruelling 44 phases, Jack Conan scored the decisive try which Nacewa converted, concluding the night’s scoring at 8-18. Tadhg Furlong was awarded man of the match on a night where all forwards were well and truly put through their paces!

This excellent result for Leinster cannot be understated in that they are now very much in control of Pool 3 after only three games played, and denying Exeter a losing bonus point will surely prove crucial towards the end of the pool stages.

Leinster’s performance was far from perfect but they showed world class from position 1-23 in how they took the game to Exeter from start to finish. There was no let up from the boys in blue and it was very evident from the off how hungry they were for a win at Sandy Park. 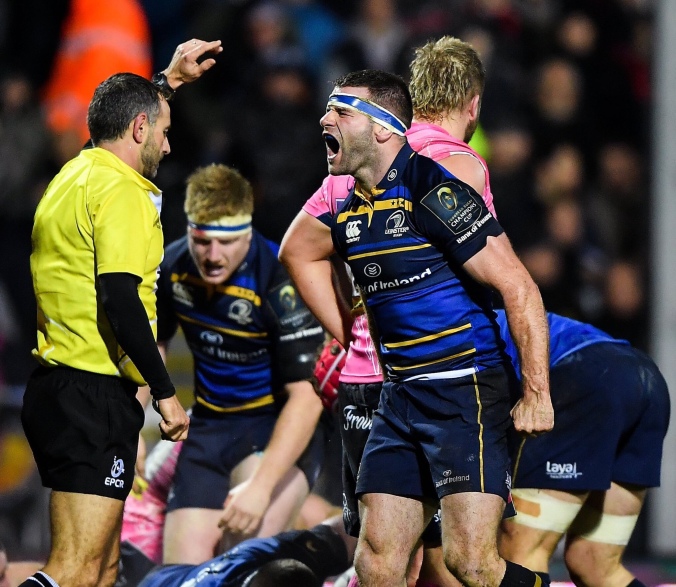 This Leinster squad is producing some fantastic performances and incredible results, sometimes against all odds. To come away from three rounds (two away from home) with 14 points is unprecedented given the tag of it being the pool of death! It’s a huge sign of intent from Leinster and a credit to the Leinster management team that has developed an incredible squad over the past 12 months.

There’s still 3 rounds to go but Leinster can take huge confidence and pride from their achievements in this group so far. All they have to do now is keep that intensity up and perhaps raise it so that they can top the pool and secure that very crucial home quarter final. And that journey continues next week at the Aviva Stadium against an Exeter team surely hungry for revenge.