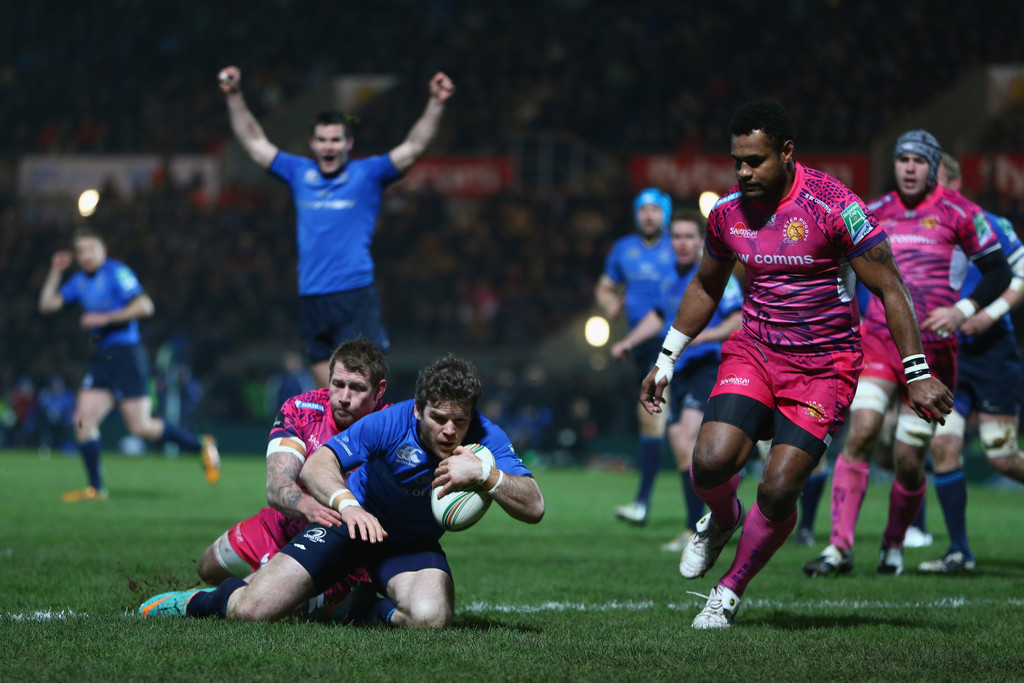 Round 3 of the Champions Cup is finally upon us with back to back fixtures against Exeter Chiefts. Exeter are a familiar foe to Leinster in the Champions Cup, we met them in the 2012/13 season where Leinster won the away fixture 20-29 and Leinster also won the home game 9-6.
Although this must fill us Leinster supporters with confidence, a lot has changed for both teams since then. Leinster went on to collect a few more trophies (4 in total) but have failed to lift any silverware since 2014. Exeter has climbed up the pecking order in the English Aviva Premiership and finally got their hands on the trophy last season. Exeter, like Leinster, also come into this match having won their first two rounds of this season’s Champions Cup, while Leinster are two points clear at the top of the pool after securing two bonus point victories over Montpellier and Glasgow. Exeter are in fantastic form this season in their league and currently sit at the top of the table, and unbeaten at home in Sandy Park this year.
Leinster are also in flying form and sit in second place in Conference B in the Pro14. So, both teams are coming into this game with with confidence and will bring a wide variety of strengths and skill that will undoubtedly test both sides more than the first two rounds of this competition.

Exeter may not have the same high profile players that Leinster do (sure who does eh?), but they have a very cohesive and well drilled squad that work very well together. They also have a sprinkle of international talent in the team to take to the field; Henry Slade in the centre, Gareth Steenson (originally from Ireland) at out half, and Jack Nowell to spring from the bench to provide cover at full back.

Where the game will be won
I believe that this game will become very focused on who pulls the strings best from out half. We have two excellent out halves who will lock horns and hope to out play each other, and while the very harsh Winter weather may play its part in the field of battle, this match will truly be an epic battle, somewhat like a very popular show at present, but a little different in that we will be watching both teams trying to defeat the other through a ‘Game Of Tens’……….sorry.

I expect our pack to dominate this game but Exeter will most likely keep this game loose as a result, relying on their scrum half to provide quick ball to unleash their backs on Leinster. But when it comes to the scrum and line out, Leinster should have the upper hand. This will allow Sexton to deploy more attacking plays and bring our wingers into the centre stage.

Coming away with a win tomorrow will be a huge task for Leinster as Exeter are performing extremely well at home and show very little weakness around the park. However, my cheeky prediction is that Leinster will score first and early in this game, potentially via Jack Conan, and I don’t see Leinster conceding the lead after that. It won’t be a massive win in terms of points difference on the board, but I predict a massive win for Leinster in terms of pool table position. If/when Leinster win this match, they’ll have a stranglehold on this pool, and after last season’s disappointment, I truly feel that we’re going to see something very special from our boys in blue tomorrow.