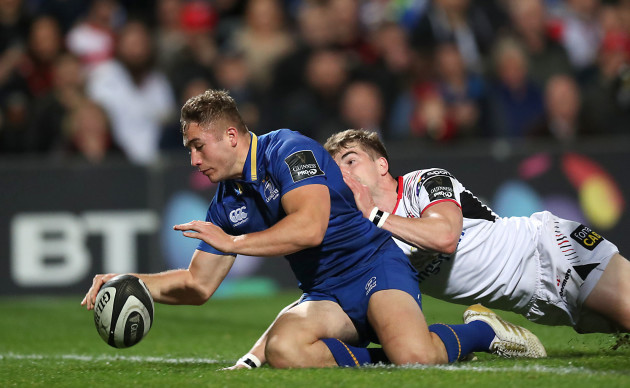 It took Leinster a while to find their feet in this match but when they finally did, they never looked like losing it. It was a day that started with a lot of unknowns; will the 12 replacements in the team cause some rustiness, are the young lads ready to crank it up a notch at Kingspan, what impact will the absence of Sexton have?
Answers to these questions and more were answered quite early on as although it took a quarter of the game for Leinster to look impressive going forward, you could see that they were growing more and more into the game, and forming a very cohesive unit in key areas.
Ulster scored the first points after 5 minutes and looked sharp when entering Leinster’s 22. Noel Reid went off injured very early on which resulted in Larmour needing to play out the rest of the match. I was a bit worried by this as I felt if we were to win this game, we needed the bench players available in the latter stages to overpower Ulster’s inferior bench. Larmour however made an immediate positive impact by cutting through one defender as he ran a great line en route to the try line, managing to evade another two tacklers on the way. His try was sublime and it seemed to invigorate the team as they looked clinical in attack and solid in defence after the restart. It was reminiscent of Garry Ringrose’s first big start for Leinster against Munster last season where he ran past one defender, then cut inside to evade another before offloading a great pass to get Nacewa under the posts. Larmour, like Ringrose in that match, has instantly got people talking and surely going to cause Cullen some headaches when selecting the back line next week. Here’s what Cullen had to say when asked about Larmour’s performance:

“If you look at the very experienced back-line they (Leinster) were up against as well — incredible footwork for his try and he has that bit of x-factor as well. He’s got plenty of things to work on, but he’s a good kid and he works hard.” “We asked a lot of Jordan to be able to do that (play at 13). Hats off, he just gets on with things and he’s happy to truck on.” “He’s going to get better, Jordan. Because he wants to get better and he wants to learn. A positive step for him today.”

Ulster may not have looked their best in this game but they tried very hard to starve Leinster of possession and build their own platform in attack, to which they were rewarded with a try from Sean Reidy, which was converted by Christian Lealiifano. This enabled them to take the lead (10-7). Leinster however made it all square shortly after via the boot of Ross Byrne and then scored a three pointer again just before half time to make it 10-13 lead at the break.

Leinster were a much different animal in the second half and were ruthless in almost all areas of their game. Ulster suffered some malfunctions in defence and didn’t look strong in attack which resulted in them not being able to challenge Leinster’s rush defence. The major issue for Ulster was evident at the lineout where they couldn’t create a platform in this area and managed to lose a few lineouts of their own. This only gave further momentum to a Leinster side already looking too dominant. The relentless pressure from Leinster finally got rewarded with a try from Luke McGrath beautifully set up by a slick pass from man of the match and captain Sean O’Brien. Ross Byrne didn’t convert it but the lead extended to 10-18 after 62 minutes.
Ulster defended very well for the rest of this match but Leinster kept the pressure high to allow Luke McGrath to score again on the 78 minute mark, which Cathal Marsh converting. Although Leinster showed endeavour in the final minute to try and claim another try and winning bonus point, it wasn’t to be and the game ended 10-25 to Leinster. 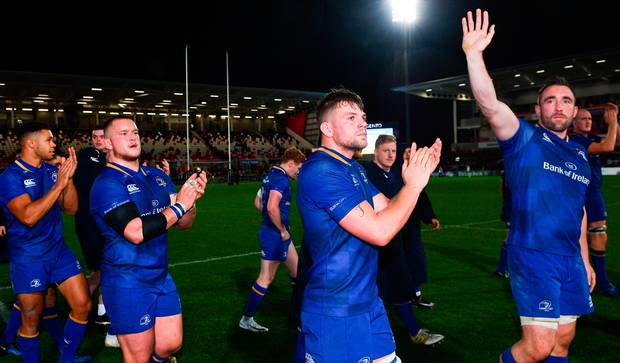 This was a very crucial win for Leinster, not only because it was a derby against a familiar foe in a very tough battle ground, it was important for this “2nd team” to perform well and show that this strength in depth is a huge weapon in Leinster’s arsenal. And it was. After the many questions asked of this selection by both the media and indeed Ulster’s challenges in the first half, this relatively young side looked sharp for the most part, and although it was in Kingspan where not many away teams win games, they never looked like losing. By the end of this season, the lines will become quite blurred in terms of whether Leinster are fielding a first or second string team. The young lads especially look like serious contenders to start each game going forward.

Leinster are learning how to win on the road this season, and win on the road against very tough opposition. Leinster struggled against Ulster away last season and also stuttered away from home on other occasions. This season, the boys in blue look a lot hungrier, confident away from home, and are implementing various styles and game plans in each game. Mixing it up was not something Leinster did last season, they generally focused on attack (which is brilliant) but when that didn’t work, they would stick it out until it did. This season, they are trying different things and adapting to the conditions, pressure, challenges from opposition, and most importantly their own failings that can sometimes unfold during the match.

Next up, Glasgow away! After Leinster secured a bonus point win against this team in Scotstoun last weekend, the Scots will be well up for this one. I have a feeling that Leinster will be too. Bring it on!!