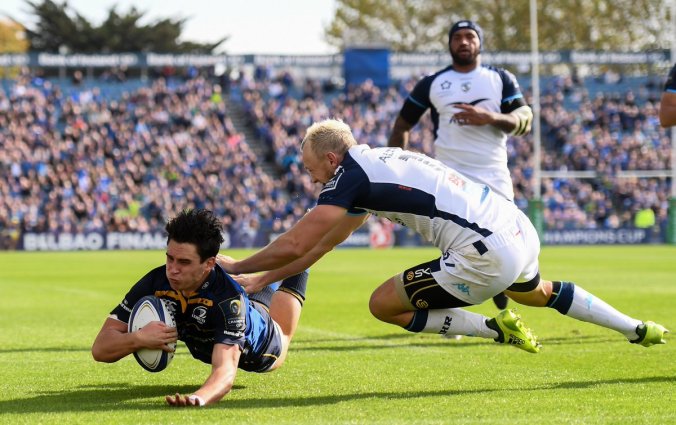 What a fantastic start to the season! The match had everything; free flowing rugby, tough forward battles, gut wrenching tackles, plenty of tries (6 in all), and a nail biting finish. It was a great advertisement for the Champions Cup and of course a great result for the boys in blue.

The game started with high tempo from both sides looking to get scores on the board early. Although the Leinster squad was missing hugely influential players like Garry Ringrose, Rob Kearney, Jamie Heaslip, Sean O’Brien, Johnny Sexton, and Scott Fardy (just before warm up), the team that togged out for Leinster showed no fear and instead delivered a very ambitious and highly skilled performance. Scott Fardy was removed from the match day squad due to his wife going into labour. James Ryan replaced him and put in a great shift for his first cap in the Champions Cup. It’s a credit to Leinster’s strength in depth that such a quality player can be called upon at the last minute.

The first score came from Joey Carbery after 18 minutes who dove in for a wonderful try in the corner to secure Leinster’s 400th try in their European history. At this point, can we comfortably say that Carbery is now Leinster’s new full back and not a development out-half? I think his pace and incredible step makes him a nailed on full back for Leinster, and potentially Ireland. Considering his small frame, he’s also a fantastic tackler and defender.
Montpellier continued to bring huge intensity but Leinster seemed to raise theirs. Josh Van Der Flier scored again for Leinster at the 25 minute mark to extend the lead, with Isa Nacewa adding the extras to make it 12 nil. Leinster created some more scoring chances as the clock ticked closer to half time, but it was the immense power of Nadolo who finally got Montpellier on the scoreboard after 38 minutes. Ruan Pienaar added the conversion to make it a 5 point game at half time. Leinster and Montpellier shared the possession at 50% each in the first half but Leinster managed territory better which ultimately resulted with them coming out on top at the break.

Leinster came out all guns blazing at the beginning of the second half. Henshaw looked like a man possessed and made some powerful strides forward and put in some crunching tackles. His work rate at the start of the second half resulted in him scoring a wonderful try 4 minutes into the half, which Ross Byrne converted to extend the lead to 19-7. Henshaw’s work rate seemed to rise more and more as the game went on. He was the very well deserved man of the match. It’s worth pointing out at this stage in the match that the support at the RDS seemed electric, all supporters were on their feet at times and the roar of the crowd surely spurred the players on, well the ones with blue jerseys anyway!
Montpellier soon started to find their purple patch and around the 61 minute mark, Nadolo showed his untouchable strength to drive over the line for his second try, which again Pienaar converted to bring the score to 19-14.
One of Leinster’s big rising stars Barry Daly put in another excellent shift for Leinster. His work rate, skill and ability to read the opposition is great to watch, he’s reminiscent of Isa Nacewa in his hay day. Of course, as it’s becoming quite a regular feature for this lad, he scored a great try on 67 minutes, unconverted, which extended the Leinster lead to 24-14. The try also secured a richly deserved bonus point for the boys in blue. Montpellier kicked over a penalty at the 71 minute mark to bring the score to 24-17, but this is how the game finished on the scoreboard.

All in all, it was a fantastic start to the campaign for Leinster and a very heartening performance. After last weekend against Munster, you could tell that Leinster were much improved and looked to be focusing more on attack as well as strengthening their already solid defence. One of the great improvements that I noticed from the game last weekend was Leinster’s ball handling skills. They could hold onto the ball for multiple phases, especially within the opposition 22, without spilling the ball or throwing wayward passes born of a moment of panic. Cool heads and team cohesion is surely something that has been drilled into this squad before and after that match. You could see that it was much more improved today. Every Leisnter player knew exactly what their role was, where to be positioned, not tempted to leave their posts, and generally showed huge trust in one another. This is an area which I feel Leinster often struggle with but it simply wasn’t the case today. The only area for improvement in my opinion is that they need to protect the ball better at the ruck. There were three occasions during this match that Leinster put themselves in a great position in and around Montpellier’s 22 only to be turned over quite easily. If Leinster can improve this area of their game, I think they will become unstoppable and become huge contenders to not only get out of this pool, but to also challenge for silverware.

The overall performance from Leinster today wasn’t perfect, but it was by far their best since the beginning of the season. They have clearly sent out a huge message of intent and although it’s still early days, it’s very heartening to see a high octane performance coming from the boys in blue from the get go!

More of same next week please!