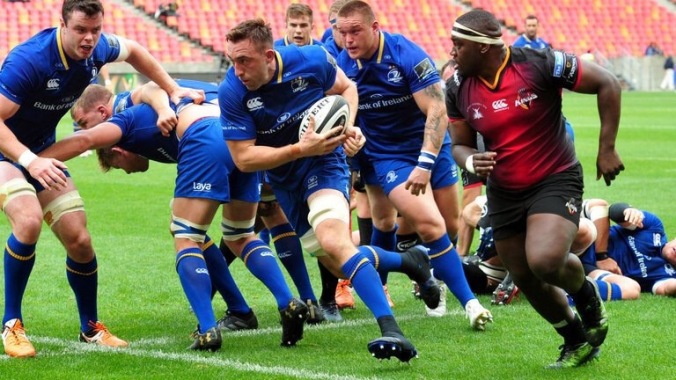 Well that was certainly a game of two halves!!
Leinster defended heroically throughout the first half after only getting approx. 35% possession for the first 40 minutes. The Kings deploy a fantastic and very entertaining style of rugby where they try to keep ball in hand and keep the ball moving fast from wing to wing. They looked very threatening particularly in the first 20 minutes where it looked like a try was imminent. However, it was Leinster that scored the only try of the first half via Noel Reid and then managed to keep the Kings from crossing our line despite persistent bombardment in our 22.

It seemed that this young Leinster side needed to regroup and refocus and that things would work more in our favour in the second half. And that’s exactly what happened, the performance in the second half changed a lot for Leinster. They added some very clever plays to their counter attacking and reaped their second try after 2 minutes into the second half via Rory O’Loughlin. Leinster went on to score three more tries through Jack Conan, Joey Carbery and Dave Kearney. The Kings scored one try of their own in the closing stages but due to Leinster’s rock solid defence, the writing was on the wall for the Kings after Rory O’Loughlin’s try.

The young players really shone throughout and showed great character by not getting rattled too much by the Kings relentless free flowing attacking plays. The defencive line was managed impeccably and the team looked very confident when threatened inside the 22.

The man of the match was Luke McGrath. He performed very well, had a big say in at least three of our tries and managed to deliver quick ball and accurate passing throughout. Well deserved.

Although the attendance for the match was appallingly low, the entertainment for all supporters watching at home was very high. It was a great advertisement for the new league format.

Of course, the challenge from the Cheetahs will be tougher next Friday and we can expect that the young Leinster squad will be tested even harder in defence. I think they’re well prepared for it however and it should be a cracking game!

Three games into the new season and Leinster have three wins, all of which are bonus point wins. Oh, and we’re top of the league!! That’ll do nicely!