So here we are, at the penultimate stage of the Lions tour! It’s been a great journey for the Lions with a lot of ups and downs, missed chances and great victories. Some belief was lost by some supporters and media outlets along the way but surely full pride has been restored by all for the final game, the game that will define the Lions.

Below is what the Lions team looks like for this weekend (KO 8:35am Irish time, 8th July): 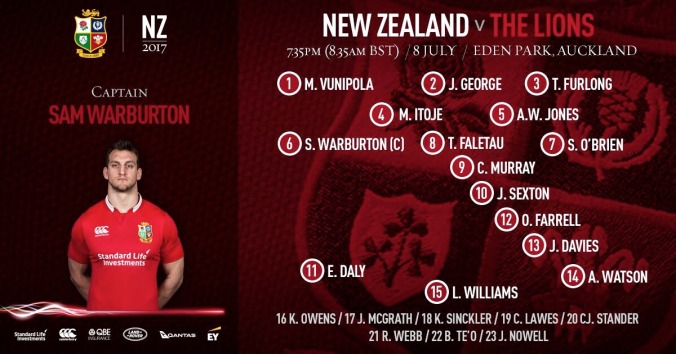 As you may have already noticed, there are no changes to the team that defeated the All Blacks 21-24 last weekend. Sounds fair enough when you think we defeated the All Blacks with that team! Although it was a hard fought uphill battle upon which the Lions eventually stood tall with victory, there were many elements to the performance that caused a lot of concern. The main element of course being discipline, or lack thereof. The Lions gave away 13 penalties during that match but still managed to win the game. The theory that the All Blacks fought hard with only 14 men for almost 3 quarters of the match may be used to explain how we got the win despite so much indiscipline. However, I like to believe that our game plan of disrupting the All Blacks attack was more crucial. Just take a look at the try count for both sides, two for the Lions and zero for the All Blacks. It’s been sixteen years since a team has kept the All Blacks that humble! I believe that the Lions would still have won this match even if Sonny Bill Williams had not been sent off.
Although it was very heartening to keep the All Blacks clear of our try line, the indiscipline must stop if we are to win the final test. Singling out one player for the cause of so much indiscipline is not always fair, but I think most people could see that Mako Vunipola was a frustrating sight and a seemed void of focus throughout the match. He managed to give away 4 penalties and also did himself and his team mates no favours when eventually he got sin binned. Personally I would have opted for Jack McGrath to start this match but I believe Vunipola has been retained for the simple fact that he has performed consistently to a high level overall throughout this campaign. If Vunipola has another bad performance to same magnitude this weekend, it will lead to a certain All Blacks victory. As a result, discipline will be key, more so than ever. This goes for all 23 players, each and every one of the Lions will need to focus on reducing the penalty count and keep composed for 80+ minutes.

Alyn Wyn Jones is another player who has raised an eye brow for me this week in terms of being a nailed on starter. I wouldn’t have been too concerned if Henderson had been called up instead. Wyn Jones is a great leader, a proven warrior for the Lions and indeed Wales over the years. However, he hasn’t reached the same heights in terms of performance and leadership in comparison to seasons gone by. All that being said, he has been retained and it’ll be interesting to see how he performs.

Gatland has kept his faith in Warburton to lead the team and has kept the key men of Murray, Sexton and Farrell in place to further display their talents shown last weekend.
I have no concerns over the rest of the selection as each player is more than capable and have shown their qualities on more than one occasion during the tour to warrant their place either in the starting 15 or on the bench.
Gatland has made a couple of big gambles for the final test but as we’ve seen in the previous third and decisive test for the Lions against Australia in 2013, sometimes his big gambles pay off.

Hansen too has made what some may call big gambles. Ngani Laumape will make his second All Blacks appearance of this tour at 12 and Scott Barrett (brother of Beauden) will take a place on the bench, also in line to make a first appearance against the Lions for the national team. Julian Savea has been brought in on the wing after missing the first two tests. A very potent team overall and they will be very hungry to not only seek revenge for their loss in Wellington, but also take the glory by winning this series!

Where the game will be won
The Lions will need to come into this game with a very solid mindset. A mindset oozing with belief. There were glimpses of this mindset in the last two tests but it only flickered at times. It needs to be complete this weekend if they are to raise the trophy and take the scalp that so many Lions teams before them have failed to achieve.
The All Blacks are strong favourites to win the match and take the series but they were also favourites to win last week in Wellington. Of course, winning in Eden Park will be a harder task but that’s where full belief can lend a hand. Gatland mentioned what’s at stake and what an amazing achievement awaits the battle hardened Lions:

“This group of players, they have an opportunity to leave a bit of a legacy” “There have been 11 Lions tours of New Zealand and only one has ever been won. So they have the chance to do something special.
“You get those moments in your life and you don’t want those moments to pass you by and that’s what big occasions and big sporting events are about.”
“As the match gets closer, the players will start to realise what potentially could happen and what a special moment that could be, winning a series in New Zealand, creating a legacy and creating history for themselves and doing something special.”

Prediction:
I think the Lions will improve this week and will finally show us all what they are truly capable of. I did a bit of research and could not identify the last time the All Blacks lost back to back games. However, I feel that if the Lions show up with all guns blazing, there is only one team in the world that will stand any chance against them but even they will struggle. The All Blacks will undoubtedly show up and show the world what they’re made of but I feel that there is a lot of belief in this Lions squad and they aren’t going to settle for anything less than a series win in New Zealand. Glory awaits!
All Blacks 25, Lions 28

One thought on “All Blacks v Lions: 3rd Test Preview”