The Lions have entered the lion’s den and have had ups and downs for almost two weeks now. And by lion’s den I mean of course the home of the most ferocious, fanatical and famous rugby nation in the world, New Zealand!!

We (the Lions, albeit I’m just merely a mortal supporter) kicked off the campaign with a very narrow win against the New Zealand Provincial Barbarians at the beginning of June. Following this, most pundits wrote the Lions off and sure according to some rugby journalists; the team, coaches and staff might as well just pack their bags and head home. I’m so so glad that they didn’t listen to them and instead decided to crack on.

Well, the following week the Lions lost to one of the teams which would have been perceived as the easiest team in our fixture list to beat. Perhaps that was one of the reasons why we lost. Although, I prefer to believe that rustiness and tiredness got the better of them. None the less, the Lions succumbed to a case of the Blues……… I know, cringey. However, the Blues deserved the win and the Lions took some lessons from it.

The following week we faced the strongest provincial team in New Zealand, the Crusaders. Up until the point where they faced the Lions, the “Saders” had played 14 games this season, and won ALL OF THEM. However, the Lions sunk their teeth into them, roared to success, and ended the Saders’ crusade to defeat the Lions! At this point, I promise not to use anymore cheesy puns about lions but for those who love a bit of cheese, I hope you enjoyed it!

A few days later (three in fact), we put up a great fight against the Highlanders and showed some great progress but failed to get the win. The rugby pundits/journalists from back home had a field day. It’s funny how their post match write ups following a loss are always more passionate, well written and almost filled with a sense of joy as opposed to reports on a win.

That leads me onto this weekend’s match against the mighty Maori All Blacks. This team has a very rich heritage and the players have huge pride in this jersey. Make no mistake, this squad of players are well geared up for the challenge they face against the Lions. You might say they’re very eager to tame the Lions. OK, I broke my promise but I just couldn’t resist!
Below is the team selected to take on the Maori All Blacks (MABs) tomorrow (Kick off 8:35am Irish time): 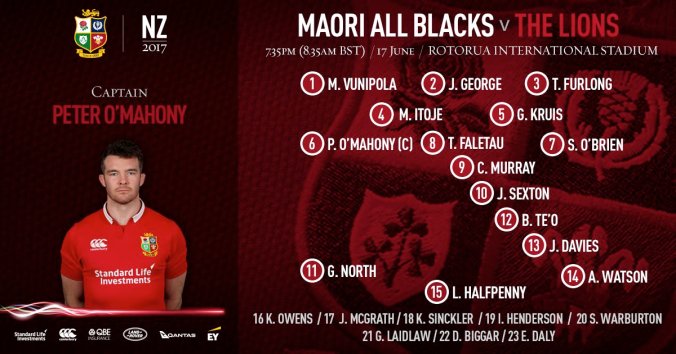 It’s a very nice line up, well balanced between starting 15 and the bench. I think Faletau has been the standout performer so far in this tour, he’s become a very reliable and consistent performer. Peter O’Mahony will lead the team and will hopefully bring what Gatland refers to as a “Munster Mongrel” attitude to the team.
O’Brien and Furlong will be key in this game, their forward power is unstoppable and surely this will be an area of focus for the Lions in negating the MABs’ power at scrum time.
Conor Murray will be delivering the same world class duties at scrum half I’m sure and will have some fantastic first/second/third receiver options that would just make your mouth water (although it probably won’t unless you’re very strange).
The back three have power and pace to beat the band and I think if we can create a platform for these lads, our try scoring stats should hopefully (please please please) rise significantly.

One guy I’ll be looking out for a lot will be Johnny Sexton. This guy in my opinion has been receiving a heck of a lot of bad press since, well, a long time, but specifically a lot since he was announced as one of the out halves in the Lions squad this year. He misses a kick, so he needs to be dropped. He misses a tackle, he shouldn’t be included on the team sheet. He misses touch, he’s a massive liability to any team. This is just ridiculous to me. Sexton is by far the best out half in the northern hemisphere. Forget about opinion for a second, just look at the stats which like Shakira’s hips, they just don’t lie!
Top points scorer tally in Europe (only counting 10s who are not retired), started all three Lions tests in the winning Lions tour in 2013, has lifted more trophies than any other player in rugby history, and a ton of incredible kicking stats that would make your eyes water (if you’re peeling onions while reading them). Oh, and he didn’t miss any kicks against the All Blacks which Ireland defeated last winter!! And thank goodness for that, sure he missed a kick against the same team in 2013 and sure he might as well have retired from rugby altogether!
Very few people have a lot of great things to say about him apart from the actual players he plays with and against, including Paul O’Connell who said he’s Joe Schmidt on the pitch. The only people who only have great things to say about him are generally from the southern hemisphere. I find this interesting. Just like the northern hemisphere media who almost relish the opportunity to kick a team when they’re down, the southern hemisphere love to heap praise on a lot of players from up north. They just see the talent and respect it when its there. They can see the raw talent of Sexton and the threat he poses. He’s allowed a bad game here and there just like every other player, they get that. And I think we will all see how great he truly is tomorrow! Now that that rant is out of the way (it’s been building up for some time), lets move on shall we?

Essentially, the winning of this game will more than likely come down to who scores the most points……….The way in which those points are accumulated however will be key. Against the Crusaders, the Lions created many try scoring chances, however they failed to get over the whitewash and ground the ball with each opportunity. They ended up winning the game via the kicking tee.
If the Lions are to win this game and indeed challenge the All Blacks come the test period, they need to start creating chances and scoring a lot more tries. Of course, winning would help too. The clinical edge has been missing from the Lions so this should be an area that has been focused on in the training grounds and we should see the benefits of that tomorrow.

James Lowe, discuss! This guy has been lighting up the stage for the Chiefs for the past couple of seasons. He really scores tries for fun and assists in countless more. The fullback is an unbelievable talent, and he’ll be lining out for the MABs tomorrow. Keep a close eye on him. If you don’t get to see him in all his glory tomorrow however, don’t fret, he will be joining Leinster Rugby next season! Wahooooooooooo!

Where the game will be won
I think the team that comes out attacking hard from the very beginning will put themselves in a very strong position overall. Bit of an obvious one but it has been something either the Lions or our opponents have forgot to do throughout this tour already.
The Highlanders and the Blues in particular did this (started fiercely) against the Lions and caused a lot of confusion among the ranks which eventually led to our defeat. Similarly, when the Lions came out against Crusaders with a blistering pace from the off, they caught them napping and rattled the team for most of the first half.
If both come teams come out of the blocks firing all cylinders, throwing kitchen sinks at each other and making each and everyone one of their guns blaze, I can see the Lions winning. The reason for this is the pack. We have a delectable pack from 1-7 and I feel almost every team in the world would struggle against them when on point. I also think our 9 and 10 pairing of Murray and Sexton will prove crucial throughout the game as they are just more experienced and have more strings to their bow than the MABs’ Tawera Kerr-Barlow (scrum half) and Damian McKenzie (out half).

At the end of the day, it gets dark. I think the Lions have been hurting from the Highlanders defeat and this should galvanize the team. We’re getting so much closer to the tests now and it’s time for the Lions to front up and take the game to their opponents.